The question of whether ninjas or pirates would win in a fight has been raging for years. No, really. And it seems one app game dev is looking to answer this age-old question by blending it with yet another famous mobile gaming rivalry: birds vs. pigs. Enter the latest Koko Digital game. 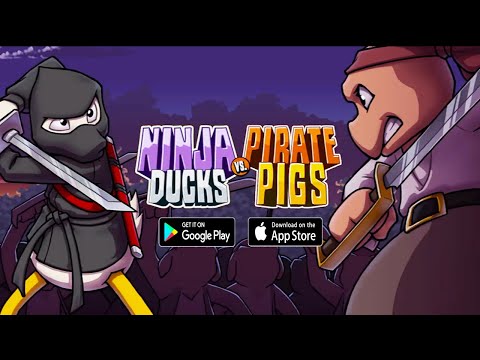 Ninja Ducks vs. Pirate Pigs puts players in control of Krispy the ninja duck as they tear their way through an armada of pirate pigs in a side-scrolling adventure with a retro feel. An arsenal of weapons and upgrades including fireballs, lightning, a trusty sword, and, of course, shurikens can be deployed by players in their pursuit of porcine annihilation.

Players will be taken from the ninja homeworld to the pirate docks over the course of 100 illustrated levels, each containing different objectives such as reaching a certain distance, and killing a certain amount of enemies with a specific weapon.

Coins must also be collected in order to upgrade weapons, increase total health points, increase the number of coins dropped, and even skip difficult levels. Krispy’s stats can also be upgraded to keep them at peak ninja performance. The gameplay looks pretty dynamic, which isn’t surprising for an app game predicated on a ninja duck shooting pirate pigs from their flying ships.

Ninja Ducks vs. Pirate Pigs is the latest Koko Digital game, an award-winning developer whose repertoire includes an impressive array of app and browser games created in partnership with such huge names as Pokémon, Reddit, and Coca-Cola.

“We’re over the moon to see this game finally go live. Our studio is blessed to create games for some of the biggest brands, but we love the chance to release our own IP from time to time too…Fingers crossed this is the start of many more to come, including a Pirate Pigs version that should also be releasing in the coming weeks..” Said Co-Founder Chris Steele.

Ninja Ducks vs. Pirate Pigs can be downloaded for free as of right now via Google Play and the App Store with in-app purchases available for players to fully kit-out Krispy.

What do you think of the Latest Koko Digital Game?